Mount Washington Valley Choral Society – Who We Are

The Mount Washington Valley Choral Society (“MWVCS”) was founded in the 1940s by three Swiss musicians who immigrated to the Mt Washington Valley area.  For almost 80 years, the MWVCS has been bringing choral music to our community.  Two concerts (Winter/Spring) and a new Summer concert series, are performed annually and singers come from all over the greater Mt Washington area including many towns in New Hampshire and Maine.  According to our bylaws, we exist to enhance the quality of life in the MWV through the performance of choral music; to educate, promote, encourage, and aid people everywhere in the appreciation of choral music; and, to provide opportunities for local musicians and singers to benefit and learn from the joint sharing of their artistry. 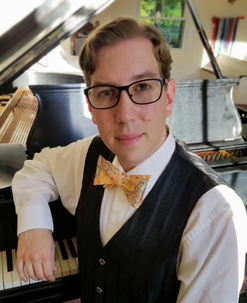 George Wiese began his conducting career as a teenager after being given the opportunity to conduct matinee performances of light opera and theatrical productions in the greater Philadelphia area.

Since that time, George has studied orchestral and choral conducting at
the Juilliard School (New York, NY), and the Peabody Conservatory of Johns Hopkins University (Baltimore, MD).

From 2009 to 2011 George served as the Assistant Conductor of the Southern Maine Symphony Orchestra; prior to that he was the Artistic Director of the Chamber Orchestra of Mount Vernon – a semi-professional community orchestra which he founded in inner-city Baltimore.

In 2009 George was Music Director of the Chicago Summer Repertory Workshop, where in 6 days he conducted the 9 symphonies of Beethoven, the 12 “London” Symphonies of Haydn, and the 7 late symphonies of Mozart.

In 2015 he conducted a month-long tour of six European countries with a choral ensemble of American students.

Beyond the podium George is an accomplished pianist and trombonist, working regularly in both capacities. Since 2011 he has served as the Executive Director of Mountain Top Music Center, a community music school in Conway, NH. George resides in beautiful Maine, where family, friends, historic buildings, and foot-pumped reed organs play important roles in his life.

Having formerly directed the MWVCS, Nancy is currently our accompanist.  She earned her Bachelor of Music degree at the New England Conservatory, and her Master of Music at Boston University.  Trained as a choral director, music teacher and keyboard instructor, she has a wealth of experience including organist-choir director positions at St. Paul’s Episcopal Cathedral in Boston and the Jewish House of Worship, Temple Israel, as well as accompanying the Ralph Farris Chorale throughout Europe.  She presides at the Casavant Tracker organ at Christ Episcopal Church in North Conway where she is responsible for music.